I’m going to (try to) tread lightly on this, as I am neither male, nor thankfully have any substantial experience of sexual coercion.

Also spoiler-alert: the below contains plot points for episodes of The Big Bang Theory and Glee which have aired in the US, but haven’t made it to UK screens yet. 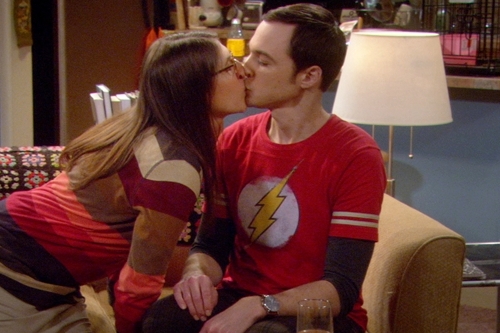 I’m quite fond of the TV show The Big Bang Theory. However there is a particular running ‘joke’ which is starting to make me feel rather uncomfortable.

The character of Amy Farrah Fowler was introduced a few years ago, as a potential girlfriend for the intellectually brilliant but emotionally challenged Sheldon Cooper. At the start, Amy was clearly being portrayed as ‘The Female Sheldon’. She is his intellectual equal (although Sheldon himself would probably not accept that), a renowned academic in her field of Neuroscience, and her social skills are somewhat lacking.

Over the seasons both the character of Amy and her relationship with Sheldon has developed. The romantic dynamic between them is rather one-sided. Amy is head-over-heels in love with Sheldon; she would very much like their relationship to become more physical, and she is frustrated by Sheldon’s apparent lack of interest in sex.

At the start, this seemed like the kind of classic role-reversal with which TBBT likes to play. You can imagine the writers’ meeting where they decide it would be really funny to have the female ‘gagging for it’ and the male ‘not putting out’. And earlier on, this premise was a rich minefield of genuine humour. But more recently, I’m starting to feel increasingly uneasy about how this is portrayed.

Amy has been shown manipulating Sheldon into situations where she can derive some sexual satisfaction, while he is clearly oblivious as to what is really going on.

A few episodes later, Sheldon has a rare moment of true vulnerability, where he acknowledges that Amy and his pairing is probably headed for a full-blown sexual relationship, and he appears daunted by this prospect. In short: he is starting to feel pressured into having sex, both by his girlfriend and by societal expectations, and it’s quite scary for him.

It’s one of those odd moments you get in comedy shows, where the tone seems to be more dramatic than comedic, and I was left genuinely confused as to whether Sheldon is at this point a figure of fun, or of pathos.

At which point I thought to myself: if the gender roles here were reversed and the male was pressurising the female that wouldn’t be funny at all – at least to a reasonably enlightened 21st Century audience. But surely it’s the behaviour itself that is abhorrent, not the genders of the actors. Whether you are male or female, gay or straight – pressuring, manipulating or in any other way coercing someone into having sex is a horrible thing to do.

Compare and contrast Amy’s behaviour with that of Raj and Howard. Howard, prior to his marriage to Bernadette, was the archetypal sleazebag. He would hit on any woman he could find, his bravado and swagger clearly masked his insecurities, and he treats women with very little respect. Raj is equally messed-up with regard to women, unable to talk to them unless he has been drinking (or thinks he has been drinking), but nonetheless desperate for a romantic relationship.

Sidebar – quite what the writers are doing with Raj’s sexuality is anyone’s guess. One moment they are portraying him as a straight metro-sexual, the next playing up his effeminate qualities and implying that the bromance between him and Howard is a frustrated homosexual affair. More annoyingly, this is always done as an object of humour, so I’ve now lost track of whether we are pointing and laughing because Raj might be gay, or because Raj might not be gay. At such times I think Captain Jack Harkness of Torchwood put it best when he sighed disdainfully “You people and your quaint little categories!”

I digress – what Raj and Howard have in common is a sickening sense of entitlement. In the most recent episode Raj and Howard comment on how ‘unfair’ it is that women like “confident normal guys more than nervous weirdos!” Immediately I recalled reading this excellent post last year, about how feelings aren’t fair, and you are not entitled to have someone like you.

So how does that map onto Amy’s behaviour? She is, at times, undeniably ‘creepy’ towards Sheldon. She’s frustrated at being in a relationship which isn’t going at the speed she wants, but, presumably, is still in love with him and doesn’t want to leave. Her own feelings of frustration are intrinsically valid, but she’s not entitled to use those feelings to justify trying to make Sheldon do something for which he doesn’t feel ready.

Had this been an isolated event I probably wouldn’t have bothered commenting on it, but as it turns out, I saw something pretty similar on the latest episode of Glee a few days later. One of the male characters, Ryder, has a rather intense moment where he reveals that he was molested as a child by an older female who was babysitting him. Unlike with TBBT, Glee was playing this scene absolutely straight – there was no indication that the audience was meant to find this funny. I expected that, in typical Glee style, this revelation would be greeted with sympathy, hugs and then they would all sing a song about it.

What actually happened made my jaw drop. While the females in the group express support, Ryder’s male friends ask him what his problem is & doesn’t he realise how lucky he was to be getting some action. Ryder awkwardly realises that he has to show a bit of machismo, so he laughs it off, but clearly still feels unhappy. The whole scene is laid on with a trowel (Glee doesn’t really do subtle) so I assumed that they would come back to it later on, and the male Glee-Clubbers would learn a valuable life-lesson about how all sexual abuse is wrong, regardless of the genders of the perpetrator or victim. Instead, there’s a short scene where a female character, Kitty, confides in Ryder that something similar happened to her once, and she understands his pain. Which is fine as far as it goes. But it left me screaming at the TV: What about everyone else? Are you really going to just leave this with a bunch of boys thinking that female on male rape ‘doesn’t count?’

Glee will, I fervently hope, come back to this later, neatly signposting it with a repeat of the revelation scene in the recap at the top of the show. Because surely they can’t just let this hang there? I guess from my privileged, liberal mindset, I was genuinely surprised that the attitude that ‘female on male rape doesn’t count’ is prevalent enough to be shown on a TV show as a first response to a young person sharing that it had happened to them. I know you get characters in fiction (and regrettably reality) who don’t believe rape is a problem full stop, but surely we are supposed to disagree with them.

I noticed on Facebook that the anti-feminist bingo card is doing the rounds again. Generally I agree with this, but I have always been baffled by the hating on the term “Equalist”. As I said earlier, shouldn’t it be the behaviour we abhor, more than the genders of the actors? If it would be bad for a man to do something to a woman, why would it be acceptable for a woman to do it to a man? I accept that the power dynamics (physical, emotional, mental) between men and women are sometimes unequal, so a male acting upon a female may have a disproportionately worse effect on the female, than if the female were to act upon a male in the same way. But I would strongly contend that even where that is the case (which I would also contend is the exception rather than the rule) just because the total effect is ‘less bad’ that doesn’t make it ‘good.’

As a female I have no idea what it is like to be a man, and as someone who has thankfully never been sexually assaulted I have no idea what that is like either. So I am doubly ignorant as to what a male who has been molested by a female might feel afterwards. But as a human capable of empathy, I can imagine that any kind of sexual violation and betrayal of trust must be horrific.

Returning to The Big Bang Theory – to be absolutely clear I am not implying that Amy wants to rape Sheldon. But depicting her desperate attempts to get Sheldon to sleep with her as ‘funny’ leaves me with the feeling that the writers are, to some extent, subscribing to this idea that because Amy is a woman and Sheldon is a man, her coercive behaviour is more socially acceptable, and therefore fair game for comedy.

Listen to the dialogue in this scene. Sheldon is explicitly saying “Stop.” He asks his partner for help, and she responds by joining in. Imagine if this depicted a woman pinned down by 2 men. Still funny?