Yesterday I blogged about my experience of overcoming my neuroses and successfully travelling to the US for work. As part of this trip, I also had an encounter with a lesser fear:

They have freakin’ MASSIVE spiders in Florida.

I have no objection in principle to the exciting plethora of other species which cohabit our planet. But I have by custom and habit somewhat limited my up close and personal interactions with them. I am fully aware that in the UK this is a rather overly cautious approach, as there are really not that many things which can kill you. Outside the green and pleasant land I call home however, all bets are off. Florida is basically a swamp, and swamps are full of terrifying creatures. Like frogs. I’m pretty sure the most venomous animal on the planet are frogs. I could google this to check but I’m tired and I want a bath so I can’t be arsed to do proper research right now, ok?

Alright, I just googled it. It may not be a frog. It may be a scorpion. Or possibly a snail, although that really is less threatening, and I would have thought, easier to evade than anything which can scuttle or hop. I’m getting off topic, and I really want a bath.

My point is that I didn’t used to be arachnophobic, although even in my more spider-tolerant days I like to think I would have had the sense to avoid something black & yellow. But, before I met Terry, I was pretty ok with our 8 legged friends. I’d could even pick up the smaller ones and remove them from my vicinity. Larger, hairier ones would get the glass and cardboard treatment, but that’s totally normal.

At the start of our relationship I kinda got a kick out of rescuing him from creepy crawlies. Prompting receipt of this lovely Edward Monk card early on: 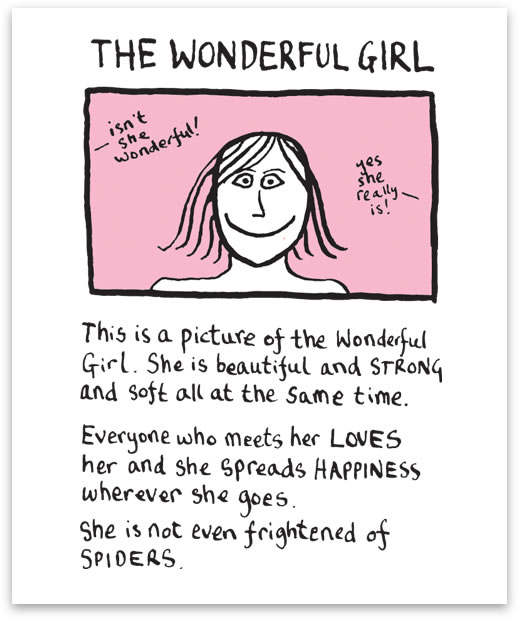 As time went on though, I internalised his fear. I had heard that in long term relationship you sometimes start to share attributes. Ideally I would have got something a bit more useful, such as the ability to touch type, or something awesome like his flawless Chewbacca impression. But no, the main habit I picked up from Terry was the urge to run screaming from spiders.

Well, that and blogging.